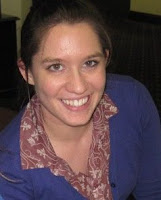 EDITORS NOTE: In this blog I aim to share what it is like to grow up in, and work at Anderson's Candy Shop through stories about our family, customers and our chocolates.

My two favorite aspects of my job are collaborating and goofing around with my sister, Susanne and being able to interact with our customers.
This blog... well, it showcases my two favorite things and lets you in on some recent drama at the shop surrounding a little-known nut. This post is based on a true story. There is a real customer named Michael Hedrick and he really did give us a $20 bill. We got a little creative from there. I hope you enjoy!

He’s round (chubby, some say), with pale skin and brown freckles.

He’s earnest and follows the rules (maybe a bit naïve).  He doesn't quite fit in, a bit of a square peg in a round hole – or in this case, a round peg in a square hole.  He’s nervous a lot.

Filbert also happens to be a nut that we at Anderson’s dip in chocolate and sell in candy bar form. And, for a long, long time, Filbert has been very unpopular.

He just doesn't fit in with the rest of the nuts.

But Filbert dreams of more.

He dreams of achieving his inner potential.

Filbert dreams of transcending his small, freckled stature and showing the world what a robust, smooth flavor he has.

He may not taste like the other nuts, but that is his strength. He is unique and he dreams of one day standing up and boldly saying, “Add me to your chocolates! No longer will I apologize for my roundness!  CALL ME HAZELNUT!”

We Anderson’s have talked of Filbert’s potential, but we haven’t been able to bring it out – until now – until we met Michael Hedrick.

With one gesture, Michael changed the course of Filbert's destiny and crossed over from good customer, into the territory of customer of legend.

On a recent trip to our Richmond shop Michael met Filbert.

While Michael is typically more interested in our fruit selection – apricot and coconut are among his favorites – he inquired on that trip about Filbert.

As he gazed down through the glass of the candy bar case at our selection of chocolates, his eyes passed over the nut section and he asked one of our employees, Barb, a question that got straight to the heart of the matter:

“What is filbert?” he mused.

Barb, having known filbert a very long time, told Michael that Filbert was also sometimes known around the shop as Hazelnut. 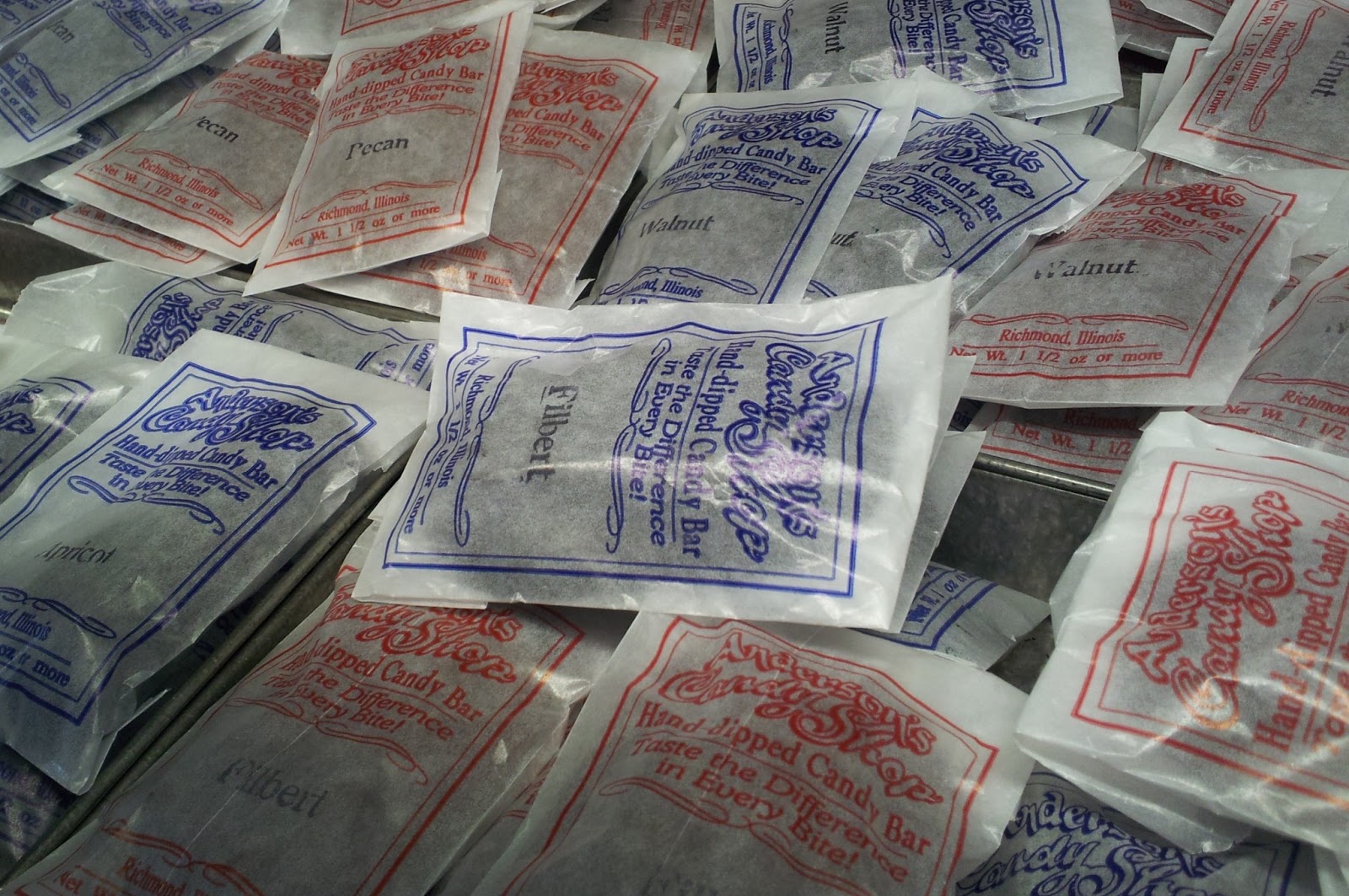 Fascinated by the fact that such a dynamic little nut had been hiding in the bar case right in front of him for so long, Michael wondered why Filbert hadn't let the world know who he was inside.

“What would it take to let Filbert be Hazelnut?” Michael asked Barb.

“You stamp each bag with the candy bar’s name – is all it would take to make the change buying a new stamp?”

Skeptically, Barb replied, “Yes.  But I’m not sure Filbert will ever change.”

About a month passed and unable to stay away, Michael found his way into our Barrington shop and visited Filbert.

Michael felt compelled to give Filbert the push he needed to realize his true potential. Micahel knew that Filbert had everything it takes to be a star, what he needed was an image makeover and someone to fund it.

After checking out with his bag full of chocolates, Michael approached Katie about Filbert's situation and offered to fund Filbert's metamorphosis.

Michael handed Katie a fresh, crisp twenty dollar bill and said those words that Filbert had so longed to hear, “Buy a Hazelnut stamp.”

It was a long road, but clad in his new label the Hazelnut that was there all along finally came out. 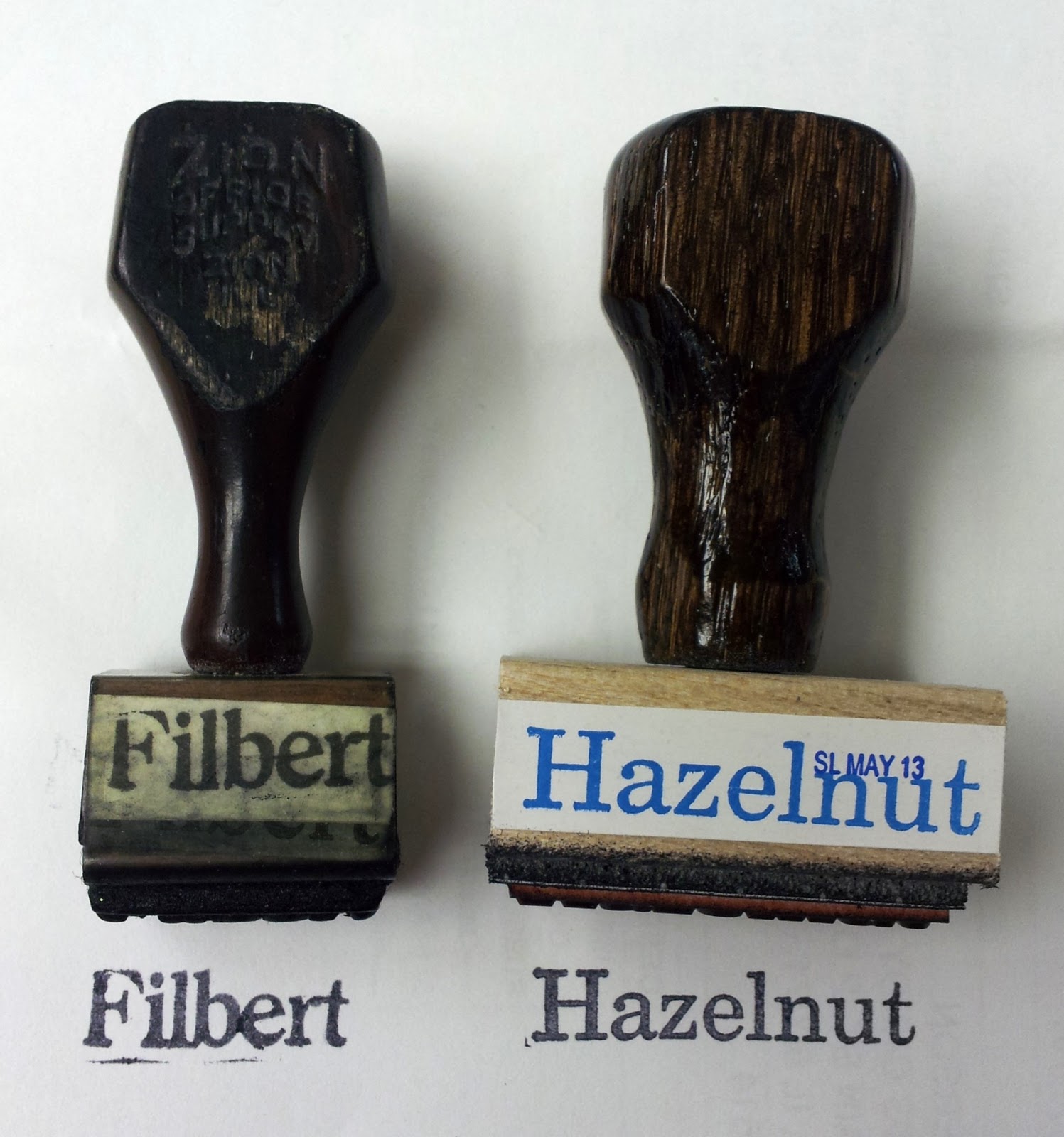 He isn't nervous around his peers anymore.

He’s proud to be the round little nut with the big, smooth flavor.

They say the clothes make the man, and in this case, the stamp made the nut.
http://www.andersonscandyshop.com/product_info.php?cPath=cPath=53&products_id=112
Posted by Anderson's Candy Shop at 1:47 PM