One of the great things about the Internet is that with it Anderson's Candy Shop has gained the ability to share stories and connect with our friends all over the country!

In the previous Chocolate Chat post, Susanne Anderson shared one of her favorite memories from growing up in the Anderson family.

We've decided it would be a nice idea to follow that up with sharing some of your favorite memories of our candy shop. The following are some memories that our friends and fans have shared via our Facebook page and website! We hope you enjoy them as much as we did :)

So, without further ado...

"I used to have a paper route when I was a kid. Every week I would take my tips and go to Andersons for a candy bar or two... back then they were 26 cents with tax!! My favorites were the pudding and the rice krispy bar. YUM!"
- Tina Petersen Coull

"I used to live across the street to the late Charles Anderson and he always had a pantry full of Anderson's candy. Every time my sister and I would go over there, he would let us pick out one candy bar each. He got us hooked at a very young age."
- Kathy Pierce

"I was raised on Anderson's chocolates, since my Grandma Letah was a "dipper" for many, many years. Her clothes, hair, skin all smelled like chocolate! And we had the best Easter baskets ever - including plenty of my favorite, Buttercream Eggs. I'm happy that the business is still in the family - especially MY family :)"
- Jill Murtagh

"I grew up in Richmond, IL, knowing the original Mr. and Mrs. Anderson. My parents put Anderson's chocolates in my Easter basket. I've lived in northern WI for over 45 years, have tasted many other brands of candy but have never found one with the same delicious and high quality as Anderson's. Over the years, whenever my family was able to visit IL, it always meant a stop to my favorite candy shop."
- by Elizabeth Morris

"My mom used to purchase the mint meltaways for my sister every Christmas! She would also send chocolates to my grandma in FL...they NEVER showed up all melted! It was amazing!"
- Shelli Metzger Eder

"My Aunty works there. I always enjoy my trips there and looking at all the neat stuff in the shop. I really enjoy watching the ladies in the back hand dip the chocolates. so fun!"
- Karen Ziegler

Thanks for sharing! We'd love to here even more memories so post them below or e-mail AndersonsCandyShop@gmail.com to share :)
Posted by Anderson's Candy Shop at 6:59 PM 2 comments: 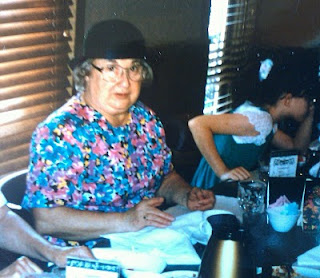 When prompted by my sister, again and again (“Susanne, will you please write something for the blog about Grandma’s hats?”), to write a blog entry about my memory of my grandmother’s hats, it stumped me. While I know my grandmother was seldom seen without a hat in the later years of her life, for some reason, this facet of her character does not bring her readily to mind. It was later, after rummaging through old pictures in search of a grandmother-with-hat photo, that I realized the key to unlocking the memory of my grandmother: her hands.

Though there is no denying her hats were an integral part of her style, it is my grandmother’s hands that link me to her. Even as a child I remember marveling at how soft and small, yet capable her hands were. Just thinking about them seems to bring me back to being 8 years old, wondering if there was something in the chocolate her hands spent so much time in that made them extra soft. Her hands were her livelihood, her creative expression, her way of showing affection. She did so much with those hands.

With her hands she molded chocolate bunnies, crosses and chicks for Easter. I remember standing in the Molding Room (or “Bunny Room,” as some may say), watching her quickly and carefully shaving off the excess chocolate, amazed at her speed and dexterity. She would pull the back of a small knife up the edge of a bunny with a quick flick of her wrist, wipe her knife on her apron and discard the chocolate shavings in a matter of seconds. Years later, when I would learn the same skills and method, I would wonder at her even more. How did she move so quickly?! And how did she not melt the chocolate?! (Now I know to run my hands under cold water every few minutes. I wonder if she used the same crude trick.)

With her hands my grandmother dipped chocolates as well. In the dipping room she would reign in a quickly spreading pile of melted chocolate, then run it through her fingers to check its consistency. (I would play in mud puddles outside and pretend to do the same.) I watched carefully as she covered nuts, creams, fruits, and chewies in a layer of thick chocolate and marked them appropriately. The ability to read chocolate marks is one thing – the ability to write them is another. To this day I am in awe of dippers who can do the latter.

With her hands my grandmother also loved. Whenever I would see her she would pull the strings on the hood of my coat and tickle my face with them. I can still feel her delicate skin brushing my face when I think of her hands.

Sometimes I wish I could have learned to do all these things from my grandmother, but I think being able to work in a building that holds such strong memories of her for me is almost as good. All I’ve got to do is think about her hands.


NOTE: The picture above was taken in the fall of 1997. Violet Anderson is seated at a table in a restaurant in Richmond, Illinois. She is wearing one of her signature hats. Susanne, at age 10, is seated next to "Grandma Vi" probably chatting with her sister, then-11-year-old Katie.
Posted by Anderson's Candy Shop at 7:26 PM 3 comments:

Dad and Uncle Lars decided to take the candy store on the road back in 1990. We began pretty small, pushing chocolate samples and business cards in commercial barns at a handful of fairs and festivals in northern Illinois and southern Wisconsin. 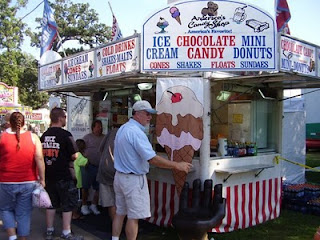 Some 21 years later we've come a long way and have learned a lot.

I am proud to say that we are still traveling the carnival circuit -- now outdoors with a fancy concession trailer -- and have developed quite a few friends along the way.

My father, Leif, and the rest of our family throughly enjoys working each of the fairs.

In doing this, we have been able to meet, chat with, and enjoy the company of hundreds of new and longtime customers.

And, in a funny way, we've created a monster. After adding cinnamon & sugar mini-donuts and ice cream sundaes along the way, we have become famous at the fairs for reasons that don't include chocolate! Sometimes we even have to remind fair-goers, 'Hey! We do chocolate, too!'


Whether you're a regular county fair patron or haven't been out to the grounds for a while we encourage you to visit one of the fairs we set up shop at each summer. Each offers a cheap and safe way to have great food and lots of fun!
Our 2010 Fair Schedule is as follows:

Posted by Anderson's Candy Shop at 1:47 PM No comments:

I grew up in a candy store 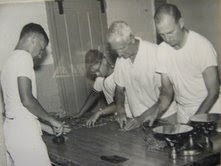 My name is Katie Anderson and I am the oldest daughter of third generation candy maker Leif Anderson -- the current owner and operator of Anderson's Candy Shop in rural Richmond, Illinios.

My father, Leif, and his brother, Lars, inherited the business from their mom and dad, Raynold and Violet Anderson. "Vi" and Raynold inherited the shop and all of its secrets from Arthur and Gertrude Anderson -- Raynold's parents.

You can see my dad (at left) uncle, great grandpa and grandpa (at right, from left) all making candy in the photo.

I was born into this family of confectioners in 1985.

Although my family did not actually live in the candy store when I was growing up (we had a house in the neighboring town) I, like my father and his father, in large part grew up at the candy store.

You see, as head cooks, accountants, janitors, repair men and the face of Anderson's Candy Shop, Anderson's are never truly away from work. Grandma and grandpa used to answer their home phone with a business-like, "Hello, Anderson's" and my dad often does the same on his cell today.

As I begin this blog, it is my hope that it will serve three purposes:

I'd also like to incorporate more than just promotional material and my point of view in these pages. I'd love to post stories, comments, questions and pictures from customers, family and friends along the way.

I encourage you to contact me at any time at AndersonsCandyShop@gmail.com.

Posted by Anderson's Candy Shop at 12:04 PM No comments: