EDITOR'S NOTE: This week, fans of Bill Murray and Harold Ramis' 1993 romantic comedy 'Groundhog Day' celebrated 20 years since the movie was filmed. The anniversary was extra special for us because our candy store was featured in the film! The following was published Feb. 3, 2012 in the The Northwest Herald of Crystal Lake, Ill. I'd describe the column (written by myself) as one part reminiscing and one part discovery. Read it and you'll understand :) 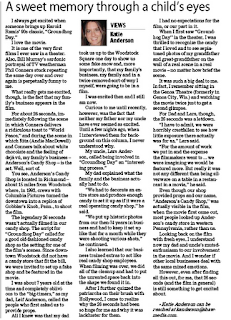 RICHMOND – I always get excited when someone brings up Harold Ramis’ 90s classic, “Groundhog Day.”

I love the movie.

It is one of the very first films I ever saw in a theater. Also, Bill Murray’s sardonic portrayal of TV weatherman Phil Conners stuck repeating the same day over and over again is perpetually funny to me.

What really gets me excited, though, is the fact that my family’s business appears in the film.

For about 26 seconds, immediately following the scene in which Conners delivers a ridiculous toast to “World Peace,” and during the scene in which Rita (Andie MacDowell) and Conners talk about white chocolate and the feeling of dejá vú, my family’s business – Anderson’s Candy Shop – is the set. Well, sort of.

You see, Anderson’s Candy Shop is located in Richmond – about 15 miles from Woodstock where, in 1992, crews with Columbia Pictures turned the downtown into a replica of Gobbler’s Knob, Penn., to shoot the film.

The legendary 26 seconds wasn’t actually filmed in our candy shop. The script for “Groundhog Day” called for a good old-fashioned candy shop as the setting for one of the film’s scenes. Since downtown Woodstock did not have a candy store that fit the bill, we were invited to set up a fake shop and be featured in the movie.

I was about 7 years old at the time and completely oblivious to the “big-timers,” as my dad, Leif Anderson, called the people who first asked us to provide props.

All I knew was that my dad took us up to the Woodstock Square one day to show us some fake snow and, more importantly, that my family’s business, my family and in a twice-removed-sort-of-way I myself, were going to be in a film.

I was excited then and I still am now.

Curious to me until recently, however, was the fact that neither my father nor my uncle have ever seemed as excited. Until a few nights ago, when I interviewed them for background on this column, I never understood why.

My uncle, Lars Anderson, called being involved in “Groundhog Day” an “interesting process.”

My dad explained what the family and the business actually had to do.

“We had to decorate an entire store and produce enough candy to set it up as if it were a real operating candy shop,” he said.

“We put up historic photos from our then-74 years in business and had to keep it set up like that for a month while they were shooting various shots,” he continued.

I also learned that our business trained extras to act like real candy shop employees. When filming was over, we did all of the cleanup and had to put the unrented space back into the shape we found it in.

After I further quizzed the patriarchs on their brush with Hollywood, I came to realize why the 26 seconds had been so huge for me and why it was lackluster for them.

I had no expectations for the film, or our part in it.

When I first saw “Groundhog Day” in the theater, I was thrilled to recognize the candy that I loved and to see sepia-toned photos of my grandfather and great-grandfather on the wall of a real scene in a real movie – no matter how brief the scene.

It was such a big deal to me. In fact, I remember sitting in the Genoa Theatre (formerly in Genoa City, Wis.) and watching the movie twice just to get a second glimpse.

For Dad and Lars, though, the 26 seconds was a letdown.

“I have to admit, we were horribly crestfallen to see how little exposure there actually was for us,” Lars said.

“For the amount of work we put in and the expense the filmmakers went to ... we were imagining we would be featured more. But really it was not any different than being silverware on a table in a restaurant in a movie,” he said.

Even though our shop provided props and our name, “Anderson’s Candy Shop,” was actually visible in the film, when the movie first came out, most people looked up Anderson’s candy store in western Pennsylvania, rather than us.

Looking back on the film with fresh eyes, I understand now my dad and uncle’s muted-enthusiasm to our involvement in the movie. And I wonder if other local businesses deal with the same mixed emotions.

However, even after finding all this out, for me, that 26 seconds (and the film in general) is still something to get excited about.